Okay – as they seem so popular (and why wouldn’t they) here is another home made bacon recipe – this one even more experimental and delicious. With Easter coming up I was looking for inspiration for a new bacon flavour. My initial thought was the traditional spice in Hot Cross Buns and Simnel Cakes – Hot Cross Bacon had a ring to it certainly. However, when I started thinking about it, it became clear that the flavour most clearly associated with Easter nowadays is Chocolate. (Pretty much) everyone likes bacon and even more people like chocolate so Chocolate Bacon suddenly seemed the obvious choice!

There are modern recipes that include bacon and chocolate together, Bacon Brownies for example, but I was looking for something a little more subtle and sophisticated. Fortunately I had some Cocoa Nibs from Hotel Chocolat and that set the plan in motion. So here is the recipe that I finally came up with;

Grind all the ingredients (except the pork and sugar) in a spice mill. Combine the ground spices with the sugar and up to a tbsp of water to form a thick paste. Cover the pork in this paste thoroughly. Place in a ziplock bag and refrigerate for the full cure time – 7 days for a pork joint this size. Ensure that the pork is turned and massaged daily. 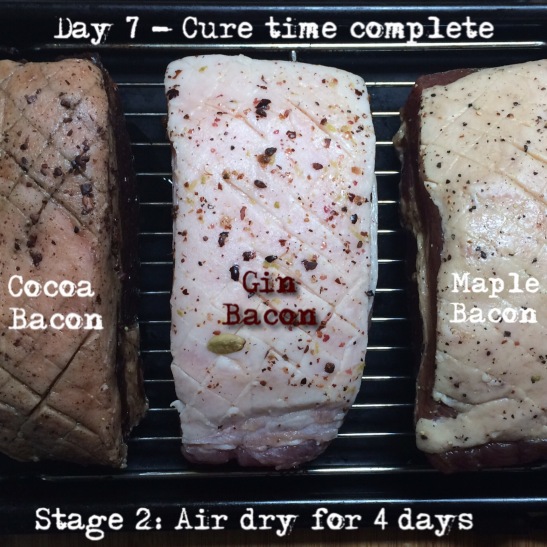 After the cure time is up, rinse and air dry in the fridge for a further 4 days until the surface is fully dry and not tacky to the touch.

Wrap the bacon in greaseproof paper and tie with butchers string for extra pretension and hipster points. The bacon also happens to keep better wrapped like this, and will last for 2 weeks without issues. If you are likely to want to keep it longer then I would advise freezing the bacon, perhaps ready sliced for ease of use.

Home made dry cure bacon like this cooks beautifully. It cooks without added fat in a non stick pan or cast iron skillet, the fat renders out and prevents the bacon from sticking. The high sugar content of a sweet cure like this means that there is a risk of burning. Watch the bacon carefully it will cook and catch quicker than you expect! On the plus side, it doesn’t shrink when you cook it, it is low in salt and there’s not lots of water that causes the bacon to steam before it fries!

So – the important question of course is ‘How does it taste?’

It tastes divine! While cooking in the pan, you start smelling the chocolate. When you first taste it you get a hint of the sweetness, then the bacon taste and finally a hint of chocolate and vanilla as an afternote.

By the way, I might still come back to that Hot Cross Bacon idea though at a later date – so don’t dismiss it yet!

This entry was posted on April 19, 2015 by thebiggayal in Breakfast, Home Made, Preserving, Recipes, Savoury, Sweet and tagged Bacon, breakfast, Chocolate, Easter, Home made, preserving, vanilla.