Hawaii meets the Netherlands in this BBQ dessert I created yesterday. Sometimes the simplest recipes are among the tastiest – this is barely even a recipe really, more an assembly guide!

Everyone enjoyed the dessert, it was sweet, tasty and very sticky. I find the messier a food is to eat, sometimes the better it tastes. With that in mind, keep the spoon for the ice cream and the juices, pick up the pineapple with your hands and get stuck in. Just keep the wet wipes handy! 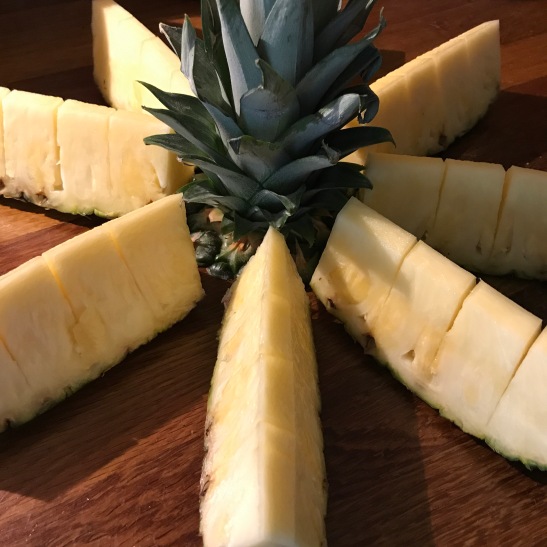 Begin by portioning up the fresh pineapple. For grilling you can either cut rings or my preference is to quarter the pineapple lengthwise. Leave the skin on, but run your knife down the centre to remove the woody core. I then slice each piece just as far as the skin – this lets the marinade really get into the flesh. 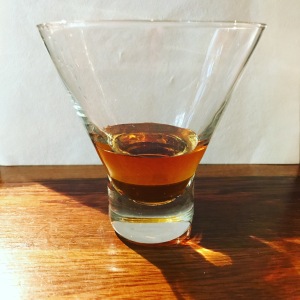 Absolutely key to this dish is the Van Meer’s  Stroopwafel Liquer. This is difficult to find outside the Netherlands – however you can order and have it delivered direct from Stroopwafel World in either a normal size bottle or a case of miniatures. Details at the end.

It’s a rich, sweet, caramel and vanilla flavoured liquer with buttery taste too – unsurprisingly it tastes of Stroopwafel. For one pineapple I used around 75ml.

Very simply put the prepared pineapple and the liquer in a large freezer bag or non-reactive bowl (i.e. Glass or ceramic as otherwise the acid in the pineapple can react and change the taste) and stir/mix frequently. I left the pineapple to marinade for around 3hrs. I’d recommend around 5hrs if you can, but not much more than that or you risk the fruit going either ‘fizzy’ or mushy.
Now you need to fire up your BBQ and make sure the grill is nice and hot. 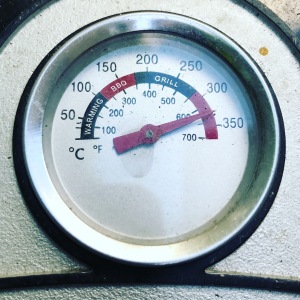 Once the grill is at temperature, drain the pineapple but be sure to retain the juices!!  Place the fruit on the grill, turning occasionally. You probably want to allow about 10 minutes grilling time.

​​
Once the pineapple is done, remove from the grill, place in a non-reactive bowl and pour over the juices you retained earlier.

Now it’s time to serve! Serve simply with a couple of scoops of nice vanilla ice cream, a spoonful of the juices and then sprinkle with crumbled up Stroopwafel.

This really is a very simple but tasty BBQ dessert.  Try it and let me know how you get on! Enjoy.

I get my Stroopwafel supplies direct from Amsterdam from the lovely people at Stroopwafel World. I’m lucky enough that I can buy stroopwafel in London, but Stroopwafel World sell the liquor that makes this dish, along with a wide range of Stroopwafel and other Dutch sweet treats. Stroopwafel Spread anyone?!  They ship worldwide at reasinable rates and the customer service is great. Pop along and allow yourself to be tempted. Tell them Big Gay Al sent you!

This entry was posted on May 21, 2017 by thebiggayal in bbq, Dessert, Finger food, Home Made, Recipes, Sweet.